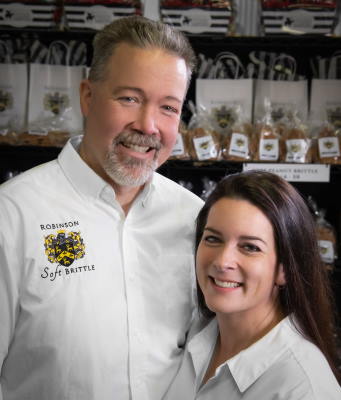 Our mission is simple. To use fine confections to connect people:

Pamela was a single mom raising 3 boys. She was known in her community for her creative "optical illusion" specialty cakes, elegant multi-tiered wedding cakes, and decorative cookies. Over the years, many people had told her that with her creative culinary talents she should go into business, but she'd never had the vehicle to do it.

Todd was a widower with 4 grown daughters. He was a long-time entrepreneur who had launched a Silicon Valley media agency and a software company during the dot-com boom, started a motorcycle racetrack school running events in California and Nevada training thousands of riders, and most recently a motorsports parts business that was still being severely impacted by that industry's collapse during the 2009 Recession.

They met in 2017 and were instantly inseparable, marrying the following year. Blending their families with one young son still at home with them, they settled into a very happy life together. Their days were filled with laughter and love, and motorcycle rides on their sportbikes, with Pamela's terrible puns and even worse dad jokes softening Todd's more serious demeanor.

Pamela had left her career in supply chain and inventory to come work with Todd at his parts business, but knew she wanted to use her culinary skills to bring in extra money. She suggested soft peanut brittle, a popular known delicacy in the Inland Northwest, as she and her mother had for years made it to give away at Christmas. Todd researched the gourmet confections market space and found it was a good opportunity for them to let Pamela pursue her passion while making extra money.

Robinson Soft Brittle was launched in summer 2019. They did their first public event that July with a group called "CDA Makers" which hosts local artisan marketplace events, and were overwhelmed with the response, selling almost all the candy they'd brought in just 3 hours. This was also where they first met Stephen Granat (Abide Culture Coffee), a local small batch coffee roaster, whose coffee is now used in both RSB's Hazelnut Espresso Bark ("Nicaragua" roast) and Caramel Macchiato Bark ("Peru" roast). This was followed by the Coeur d'Alene Downtown Street Fair/Art on the Green and the Schweitzer Fall Fest at Schweitzer Mountain Ski Resort. At this event, although bringing several hundred pounds of soft peanut brittle, they sold out so quickly that Pamela and one of Todd's daughters had to pull an all-nighter cooking candy right in the middle of the festival to make enough candy to finish the weekend. Clearly, they were on to something big.

The next step was creating their first original candy: Chocolate Hazelnut Soft Brittle. This came about because Todd's youngest daughter wasn't a big peanut fan but was fanatical about Nutella® spread. After dozen upon dozen of failed attempts they finally had a breakthrough and a delicious original creation...although it took over fifteen months to truly perfect the process. That was followed by several unique chocolate bark creations. Todd then suggested using Apple Brandy in English Toffee since Pamela was toying with the idea of adding toffee flavors, and thus their line of original liqueur-based toffee creations was launched to dramatic success.

Like most small businesses they were hit hard by the 2020 pandemic. But by the grace of God and outpouring of support from family, friends, and their community, the business survived. During this time they also branched out into selling to retailers. They now have two dozen retailers across Idaho, Eastern Washington, and Western Montana, with plans to bring on many more specialty retailers around the country.

They now have 10 variants of brittle, bark, and toffee, (7 of them are original recipes) and concurrent with the launch of the Brittle Gift website released their 8th original creation (another liqueur-based toffee).

Under the marketing mentorship of a new friend they met in fall of 2020, they decided to launch a product eGifting platform. Recruiting a team of highly skilled people was actually quite simple. A meeting with two close friends...one a career software developer and one already working with them on food photography, packaging, and graphic design, and they formed what Todd likes to call their own "Dream Team", each working in their respective fields of expertise on this collective effort.

"We are very appreciative for the overwhelming response to our confections and the opportunity to work together doing something we love that seems to bring happiness to so many people. Thank you to our family, friends, and our community, who when times were toughest and our days darkest, showed us the true spirit of shopping local and supporting small businesses. We also want to thank our state's exceptional Lieutenant Governor Janice McGeachin and the Buy Idaho association for fostering a true business-friendly environment in Idaho. There is no better state we could imagine to be as a small business."